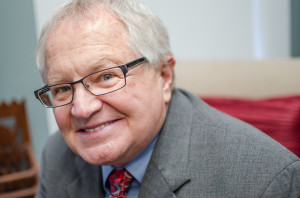 John P. Schuerman, Attorney at Law – Born in Batesville, IN and raised on a dairy farm in Napoleon, John is a familiar face around southeastern Indiana.  John and his wife, Kathy raised their seven children in Ripley County.

He earned a B.S. Degree from Purdue University and received his Law Degree in 1972 from Indiana University. John maintained his private practice while serving as Ripley County Prosecuting Attorney from 1975 until 1983.

He has also served in various other city and county legal positions in Ripley County. He has practiced private law in this area for over 40 years and has dedicated his career to helping people.  John serves on the Indiana Trial Lawyers Board of Directors.

When John is not helping injured people, he enjoys spending time with his five grandchildren as well as gardening, music, hiking and cheering for the Pacers.

John was a founding member of the Southeastern YMCA and is supporter of Ripley County Humane Society, Special Olympics and YMCA Strong Kids Campaign.